When our firstborn child Marshall turned two, I finally had the courage to open myself up to another child, if it was in God’s will. I had spent most of the past two years being overwhelmed with one child, so the fact that we were opening ourselves up to another one was terrifying.

I cried the first month when I thought I was pregnant.

Pregnancy was terrible for me;

Labor was actually traumatic for me;

The healing process was long and arduous;

For the first four months of his life Marshall cried constantly.

The images of moms cradling their sleeping newborns or sleeping babies in car seats are not something I can relate to AT ALL!

The terms “reflux” or “colicky baby” are understatements when trying to describe the difficulties we faced with Marshall’s health.  He had one of the most severe cases of gastro esophageal reflux disease (GERD) that his pediatric gastroenterologist had ever seen.

As a first-time mom, living four hours away from my family in a relatively new city, it was enough to almost send me over the edge.

It turned out that I wasn’t pregnant that first month or the next. After six months I went to the OB and we started talking fertility options. We decided to wait and keep praying. The following year we were still trying. Ovulation kits had become a line item in our budget and I was diagnosed with the very profound “unexplained infertility” label. The next step was to try the lowest dosage of Clomid I could take.

Long story short, I ended up in the hospital, and Jon and I decided since we had wanted to adopt our third child, we would just adopt our second one instead.

We did some preliminary research, attended an informational adoption meeting with an agency, and quickly realized we couldn’t afford it.

God used two couples to challenge our faith. At separate times, Sam and Amber Blossom and John and Kylie  both suggested we consider raising support. I had only heard of this happening with one other couple and the circumstances were very different from ours. But at the end of the day, we wanted to give a child a home who didn’t have one, and we wanted to add to our family, so we figured if our desires correlated with God’s will for our life, He would answer our prayers and provide the tens of thousands of dollars that we needed to bring our baby home.

We started the paperwork to adopt domestically in December 2009 and began praying with Marshall about expanding our family through adoption. Jon and I laughed when we heard the sweet words,

“God please give me two babies.”

We quickly assured him that we weren’t adopting twins! I had seen how hard that assignment was and knew there was NO WAY I could survive that.

Marshall continued asking God for two babies despite our continual reassurance we were only getting one. We ignorantly thought that we could “help” God teach Marshall about prayer by helping him to pray a prayer that God might answer. We thought he would be more inclined to continue to ask God for other things and expect answers.

We submitted our family profile to lots of birth mothers and it seemed like we either never heard back from them, or they would pick a couple who had no kids. Finally, in May 2010, we heard something good.

A birth mother wanted to interview us.  She had narrowed it down between us and another couple.

A week later we got the call. SHE PICKED US!!!

I was driving home from work when I got the call and I started shaking.

I couldn’t believe we were actually getting a baby.

Someone was going to carry a baby, birth a baby and then hand over a baby to us….forever.

Not long after we got that call, we found out we were expecting.

What God? We thought you were answering our prayer about adoption? Now I’m carrying a child?

We sought counsel from a few friends we trusted, and then decided God was saying YES TO BOTH. In July on a short walk to the beach, our tender hearted four-year old put it all together.

God didn’t answer YOUR prayer about one baby.”

How small is my faith? 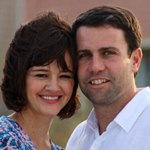 Ashley is on an exciting journey to know God more intimately through a fresh prayer life and a renewed perspective on suffering. In her free time, she enjoys helping her kids discover their passions, and going on dates with her handsome husband. She has an intense passion for supporting families in the adoption process, as well as being an ambassador for Care for AIDS. Her family and several friends, support a Care for AIDS center in Kariobangi, Kenya. They enjoy hosting several events in the Atlanta area to support clients trying to find healing and restoration from AIDS. Check out www.repromatlanta.com and eastcobbredrun.com to get involved. She loves to talk with people about the restoration happening in Kenya, and looks forward to taking trips to visit friends there with her husband and kids.